Professor Mansur was awarded a Senate 150th Anniversary Medal for his work to promote interfaith understanding.  The award ceremony took place in the Senate Chamber, Parliament of Canada, on November 29 and was presided by the Honourable George J. Furey, Speaker of the Senate.  The award citation for Mansur noted, “Salim Mansur has done extensive work promoting interfaith understanding, particularly Jewish-Muslim reconciliation. An author, columnist and professor at Western University, he is a founding member of the board of directors for the Centre for Islamic Pluralism based in Washington, D.C.”  The Senate 150th Anniversary Medal is intended to celebrate the achievements of Canadians who have made significant contributions to their community and commemorates the 150th anniversary of the first sitting of the Senate on November 6, 1867.

Congratulations to the members of our Political Science family – Professor Don Abelson, Professor Emerita Elizabeth Riddell-Dixon, and Postdoctoral Fellow Jerald Sabin, who have books on The Hill Times List of 100 Best Books in 2017!

The College of New Scholars, Artists and Scientists of the Royal Society of Canada is pleased to announce Professor Professor Quinn, as President-Elect. "It's an honour to be asked to serve as President of The College.  I look forward to working with Canada's emerging intellectual leaders to connect College members in useful and innovative ways that showcase the depth and breadth of our collective research", said President-Elect Joanna Quinn. "We're extremely proud of not only Professor Quinn's research at Western, which examines how societies acknowledge and cope with past crimes, but of her leadership within the College of New Scholars, Artists and Scientists," says John Capone, Western's Vice-President (Research). "It comes at a time Western and the RSC alike are taking great strides to increase scholarly connections and promote excellence in research."

Joanna Quinn will assume the office of President-Elect during the Celebration of Excellence of the RSC on the weekend of November 23-25, 2017 at the Fairmont Winnipeg Hotel in Winnipeg, Manitoba. Her two-year term as President of the College will begin in November 2018.

Dr. Jerald Sabin, SSHRC Post-Doctoral Fellow in Political Science, released published a peer-reviewed study with the Institute for Research on Public Policy entitled: "A Federation within a Federation? Devolution and Indigenous Government in the Northwest Territories." According to the press release, "The Northwest Territories (NWT) is on the leading edge of political, constitutional and administrative changes that are fundamentally redefining the relationship between Indigenous people and the Canadian state, says a new study from the Institute for Research on Public Policy." According to the study’s author, Jerald Sabin, the speed of change and the peaceful means through which power was shared have been striking. As he says, “Internationally, this model is unprecedented. These new institutions and practices are designed to mediate and regularize intergovernmental relations in what is becoming Canada’s first federation within a federation.” More broadly, he concludes that this power-sharing model is a significant step toward embedding Indigenous and treaty rights in the public governance framework as well as the reconciliation of Indigenous and settler societies." Download the study here.

Professor Nigmendra Narain has been awarded the Western University Residence Life Teaching Award of Excellence for 2017.  The Western University Residence Life Teaching Award of Excellence is a student-nominated accolade that celebrates and recognizes faculty members across the university who have made significant contributions to first-year undergraduate education and have gone above and beyond in supporting residence-based initiatives/events. Recipients have made lasting contributions towards fostering learning and development within the first-year student population in both the residence and university community. Nominations were received from residence sophs, staff and students and a small selection committee reviewed the impact that our faculty have had in our residence community.  Well done!

Professor Dimitrov is attending the UN Climate Change Conference in Bonn, Germany. He is representing Bulgaria and the European Union in the negotiations to operationalize the Paris Agreement, as well as teaching his classes on diplomacy and international relations via Skype videoconference live from the venue!  Professor Dimitrov also meets with members of the Canadian delegation, including Elizabeth May, leader of the Green Party of Canada.

Saturday, October 28, Western's members of the College of New Scholars, Artists and Scientists of the Royal Society of Canada hosted an event entitled, "Making a Difference: Research for Social Justice" that showcased the research being done here at Western. The event was part of the College's cross-Canada “Wave” of public discussions. Professor Quinn in conversation with Cheryl Suzack (University of Toronto) presented on Canada’s Truth and Reconciliation Commission.

Professor Quinn has been named a Fellow of Western’s Africa Institute, in recognition of her substantial contributions to The Africa Institution and to research, knowledge translation, and knowledge dissemination.  She has been recognized as a role model and inspiration to other faculty and students within the Africa Institute, their discipline, and the Western Community, and for serving as an excellent collaborator in partnership with African institutions and societies.  Fellows are esteemed for their high level professional and personal integrity.  An Africa Institute Fellow holds this honour for life. 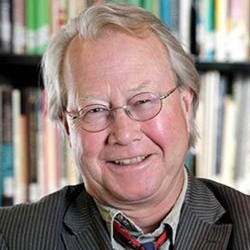 It is with deep sadness that we announce the passing away of Dr. Bob Young.  Bob was a gifted teacher and scholar, and a mentor and dear friend to many. While his impressive body of work will shape our discipline for decades to come, it was his commitment to strengthening our department and his willingness to help his colleagues develop as full members of the academy that will be remembered most.  Bob was a distinguished scholar, great mentor, and friend.  We in Political Science wish to send our heartfelt condolences to Bob’s Wife, Louise Gadbois, and family, at this extremely sad time.  Bob will be missed dearly.

Donations in Bob’s name will be gratefully received and may be made to the Toronto General Hospital Transplant Unit, or to a charity of choice.

On November 10, 2017, there will be a Celebration of Life in honour of Bob Young from 4-7 pm. at Bellamere Winery and Event Centre, 1260 Gainsborough Road, London, Ontario.

Professor Biswas Mellamphy has been invited by the Posthumanism Research Institute to give a talk about politics in the information age entitled 'Approaching Posthuman Politics'.  The event is free to all and will be held on Thursday October 19, 12:00pm in The Hawk’s Nest at Wilfrid Laurier University.

The Department has received $52,500 in funding for four recipients of The Dr. Frederick M. Barnard Scholarship Trust for the 2017/2018 academic year. Political Science congratulates Political Science students Afifa Khwaja, Jacob Hunsburger, and Caleb Althorpe and Political Philosophy student Heather Stewart on receiving this year’s Dr. Frederick M. Barnard Scholarships. Mrs. Margot Barnard has generously endowed a scholarship trust in memory of her late husband, Frederick Mechner Barnard who was a distinguished political theorist and intellectual historian at Western from 1970 until his retirement in 1985. The BarnardScholarship Trust offers scholarships to graduate students in Political Philosophy, entering MA or PhD programs in either Political Science or Philosophy at Western.

As a tribute to his research and in memoriam to honour the memory of Professor Young, Canadian Journal of Political Science (CJPS) is offering free access to his articles. Four of the selected articles included are "Leaders' Communications in Public-interest and Material-interest Groups", "Steven Lukes's Radical View of Power", "How Do Peaceful Secessions Happen?", and "The Concept of Province-Building: A Critique".