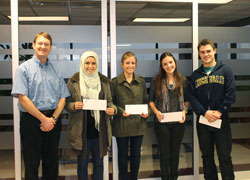 We are pleased to announce seven Political Science winners of Social Science Undergraduate Awards. The winners are:

Professor Sancton is the sixth from the right in the back row.

Professor Sancton was a plenary speaker at the Third International Conference on Local Government in Khon Kaen, Thailand, November 15-16, 2012. 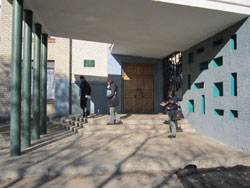 Prof. Dyczok outside a polling station.

Professor Marta Dyczok was part of the official Canadian monitoring mission to the Ukrainian Parliamentary Election, held on 28 October 2012. CANADEM posted her as a Short Term Observer in the rural Balakliia Raion (region) of the Kharkiv Oblast (province) in the eastern part of the country.

Professor Dyczok was part of the official Canadian Monitoring Mission to the Ukrainian Parlimentary Election.

Professor Abelson has participated in a number of media interviews on the 2012 US Presidential Elections. On November 7th he was interviewed on The Morning Show, Global TV (Toronto). On October 29th, he was interviewed by Janet Davison, CBC News.ca on the potential impact of the US Presidential Election on Canada. On October 12th, he was a guest on The Agenda with Steve Paikin, TVO, to discuss President Obama and Govenor Romney's foreign policy goals.

Professor Robert Young, Canada Research Chair in Multilevel Governance, has published an Op-Ed in the New York Times. His piece, entitled 'The Inconvenient Truth about Seceding States', discusses the implications for the European Union of the current wave of secessionist movements in Flanders, Scotland, and Catalonia.

Professor Charles Jones, our Department Chair, has been interviewed on the subject of human subsistence rights at The Ethics Blog. You can find the video on YouTube.

Dr. Nandita Biswas Mellamphy’s 2011 Palgrave-Macmillan publication The Three Stigmata of Friedrich Nietzsche has been reviewed in this month’s edition of The Brooklyn Rail: Critical Perspectives on Arts, Politics & Culture, by Dr. Joseph Nechvatal.

Dr. Cristine de Clercy has been appointed to a three-year term as a Centre Scholar at the Centre for the Study of Co-operatives. Located at the University of Saskatchewan, the CSC is one of North America’s leading interdisciplinary institutions in the study of co-operatives, the social economy and the voluntary sector. The post will facilitate her collaboration with the Centre’s scholarly networks and research partnerships.

For her 2012-2013 sabbatical year, Professor Biswas Mellamphy has been appointed as one of the two inaugural Visiting Research Fellows (with Dr. Dan Mellamphy) at The Center for Transformative Media” (CTM) at Parsons: The New School for Design, NYC.

Jordan Mansell successfully completed his MA, "The Concept of Rationality in Contemporary Political Discourse: A Re-evaluation from the Perspective of the Natural and Cognitive Sciences." Congratulations on your dedication and commitment Jordan! Thanks to supervisor, Dr. Andrés Pérez.

Milestones of our Graduates - Scholarship Winners

At the Graduate Student Teaching Assistants awards ceremony held on June 21st, Rob Maciel, a third year PhD student, received top honours. Rob was recognized for his outstanding contribution to teaching students in Politics 2237E, 'Introduction to Political Theory', over the past year. Twenty GSTA awards, valued at $500, are awarded annually to graduate students across all disciplines in the School of Graduate and Postdoctoral Studies. Graduate students are nominated for the award by their students and instructors. Congratulations Rob!

Each year the Society of Graduate Students, the Graduate Teaching Assistants Union, and the School of Graduate and Postdoctoral Studies jointly recognize outstanding graduate student teaching assistants across all academic disciplines at Western. Teaching assistants are nominated for the award by their students and course instructors. The GSTA Committee considers their written comments when determining the final award recipients. This year, fifteen MA and PhD students were nominated for an award from the Department of Political Science! Congratulations to Laura Anthony, Michael Carfagnini, Nick Caruana, Andy Chater, Margaret Corbett, Milan Gocmanac, Pieter Goubert, Paul Hansen, Chantelle Kennedy, Julie Kiser, Alex Kozelko, Rob Maciel, Jordan Mansell, David Nissan, and Tim Vine. Your hard work and dedication to your role as a TA has undoubtedly had a positive impact on the many undergraduate students with whom you have worked over the past year.

We are pleased to announce the appointment of Jessica Trisko as a new Assistant Professor in the Department of Political Science, starting July 1, 2012. Already an accomplished scholar of International Relations, Jessica is currently completing her doctorate at McGill University, ‘Aiding and Abetting: Foreign Aid and State Coercion,’ which examines the relationship between US bilateral foreign aid to the developing world and patterns of state violence against civilians in aid recipient countries. This project has received funding from the SSHRC's CGS Doctoral Scholarship, the SDF Ph.D. Scholarship, and the Centre for International Peace and Security Studies. Jessica is currently a Visiting Fellow at Yale University in the Program on Order, Conflict, and Violence.

Mike McGregor successfully defended his PhD thesis, "When voters decide: Causes, correlates and effects of the time-of-voting-decision." Congratulations Mike, and thanks to supervisors Drs. Laura Stephenson and Cameron Anderson.

Professor Marta Dyczok organized and spoke at a Mini-Symposium at the University of Toronto Munk School of Global Affairs on her research on Media and Memory, 19 April.

A new Minor in Transitional Justice and Post-Conflict Reconstruction has been approved, effective immediately. Students engage in emerging debates surrounding transitional justice and post-conflict reconstruction, and to allow for real-world application of theoretical constructs and explanations relating to development, democracy, the environment, the economy, human rights, politics, peace agreements and justice before, at the time of, and post-transition.

The minor requires students to take two new integrative courses designed to bring all of our students into a single classroom, based around themes central to the field, as well as other courses offered by departments and programs across campus.

TJ 2001F: Problems in Transitional Justice and Post-Conflict Reconstruction This course introduces students to interdisciplinary studies of transitional justice and post-conflict reconstruction, with emphasis on questions of conflict. Students will examine key concepts and explore theoretical problems in confronting and seeking solutions to the aftermath of large-scale events of social violence, including war, genocide, and authoritarian rule.

TJ 3001G: Studies in Transitional Justice and Post-Conflict Reconstruction This course explores issues inherent to regions facing the aftermath of large-scale events of social violence, including war, genocide, and authoritarian rule, with an emphasis on questions of justice and post-conflict reconstruction. Students will examine specific cases of recent attempts to establish just responses to conflict within affected communities. 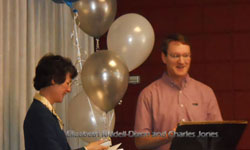 We are happy to announce the Dr. Elizabeth Riddell-Dixon Graduate Scholarship. Made possible by an anonymous donor who wanted to honour Elizabeth’s fine research and teaching career, this generous award will be given annually to a full-time graduate student who is in a doctoral program in the Faculty of Social Science, based on academic achievement and research merit with preference given to students in Political Science. Candidates will be PhD students whose thesis research focuses on promoting one or more of the following: women’s human rights, women’s equality, women’s empowerment, and women’s full participation in decision-making in at least one level of governance. Through the Ontario Graduate Scholarship matching policy, this $5,000 scholarship will be worth a total of $15,000 for OGS winners. 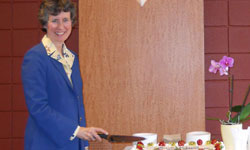 A large contingent of colleagues, friends, and family gathered on April 13th to celebrate the distinguished career of Professor Elizabeth Riddell-Dixon, who retires in June 2012. Elizabeth is a fine teacher, scholar, and administrator and the first woman to be Chair of the Department of Political Science (1993-1996).

Elizabeth made a heartfelt speech about her career and her plans for the future. We wish her all the best. Dr. Andrew Nelson, Associate Dean of Social Science, spoke of Elizabeth’s many accomplishments, especially in the area of service. The Chair of Political Science, Charles Jones, described her achievements in teaching, research, and service.

He was also privileged to announce the Dr. Elizabeth Riddell-Dixon Graduate Scholarship. Made possible by an anonymous donor who wanted to honour Elizabeth’s fine research and teaching career, this generous award will be given annually to a full-time graduate student who is in a doctoral program in the Faculty of Social Science, based on academic achievement and research merit with preference given to students in Political Science. Candidates will be PhD students whose thesis research focuses on promoting one or more of the following: women’s human rights, women’s equality, women’s empowerment, and women’s full participation in decision-making in at least one level of governance.

Through the Ontario Graduate Scholarship matching policy, this $5,000 scholarship will be worth a total of $15,000 for OGS winners.

On Friday March 30 there was a gathering in the University College to celebrate the inauguration of the Barnard Scholarship Program. The program, which is due to the generosity of Mrs. Margot Barnard, commemorates the work of the late Frederick M. Barnard, a distinguished political philosopher who taught at Western from 1970 to his retirement in 1986.

Margot Barnard, who was unable to travel to the gathering, was represented by her lawyer, John-David Middlebro. Richard Vernon, Charles Jones and Michael Milde spoke of Western's debt to Fred Barnard and expressed gratitude for the program, and John-David Middlebro read a statement from Margot Barnard offering her best wishes to the Scholarships' recipients. The first awards will be made for 2012-13.

Jacklyn Neborak, fourth-year political science student, published an article in the National Post. The article was an assignment for the 2211E "Business and Government" Course. 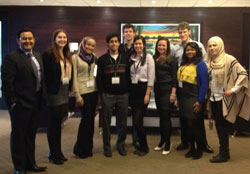 Members of the Political Science Association travelled to Winnipeg, Manitoba in January for the Annual Canadian Political Science Students' Association Conference hosted by the University of Manitoba. The theme for this year was Human Rights. It featured phenomenal speakers in the field including the Hon. Lloyd Axeworthy and Kiera Ladner. Ten students from Western represented the province at the first showing by an Ontario school in several years. The 2012 conference will be hosted at the University of British Columbia. 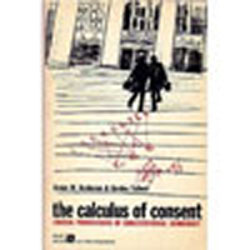 Dr. Cristine de Clercy gave a paper entitled: "Uncertainty and the General Interest in the U.S. Constitution: A Study of Embedded Power Relations" to the Second World Congress of the Public Choice Societies meeting in Miami, Florida on March 10, 2012. Her study is part of a research program known as the Veil of Ignorance Project, headed by Dr. Louis Imbeau and Dr. Steve Jacob at Laval. Analyzing the constitutions of sixteen countries, a team of international scholars is testing a well-known public choice proposition about the effects of uncertainty on constitutional formulation first articulated by James M. Buchanan and Gordon Tullock in their work, The Calculus of Consent: Logical Foundations of Constitutional Democracy (1962). Dr. de Clercy's work on the American Constitution will appear in the Project's summary findings, set for publication next year.

(March 14, 2012). We are pleased to announce that Dr. Joanna Quinn has been recommended for a Faculty Scholar Award. These awards are highly competitive, limited in number (only five in Social Science), and designed to recognize scholarly achievements of faculty members at a critical point in their careers. Dr. Quinn will be able to use the honarary title "Faculty Scholar" for the academic years 2012-2013 and 2013-2014. Congratulations, Joanna!

Jeffrey T. Parker successfully defended his PhD thesis, "An Institutional Explanation of the Formation of Intergovernmental Agreements in Federal Systems." Congratulations Jeff, and thanks to supervisor, Dr. Bob Young.

Professor Marta Dyczok - Interview in the Globe and Mail

Comments on the USSR and Hockey in the Globe and Mail.

Professor Biswas Mellamphy has published a new book entitled: The Three Stigmata of Friedrich Nietzsche: Political Physiology in the Age of Nihilism. (Palgrave Macmillan Press, 2011). Since the early twentieth century, scholarly debate has revolved around the status of the "Political" in the thought of Friedrich Nietzsche. Following Nietzsche's call for a "philosopher-physician" and his own use of the bodily language of "health" and "illness" as tools to diagnose the ailments of the body politic, this book is the first to offer a reconstruction of the concept of "political physiology" in Nietzsche's thought.